"Actually the Bible says..." and "You're on the wrong side of history" 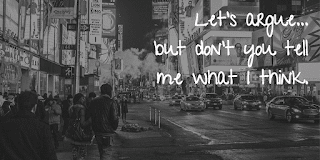 This might come off as abrasive. And I admit, it's a bit harsh, but it's really quite simple. If you aren't a Christian, stop pretending to know the Bible better than Christians. If you can agree with me on that simple point, you don't need to read the rest, and you don't need to be offended.

Does culture think they know the Bible better than those who have dedicated their life to reading, interpreting, loving, memorizing, submitting to it?

Just say you disagree with the Bible, don't say Christians are interpreting their only sacred text incorrectly.

I don't make a habit of telling Buddhists how to interpret Buddhist texts, nor Hindu Hindi, nor Muslims Islamic, nor Communists Communist because 1.) I don't have the background to know how to interpret them within that ideology, 2.) I don't believe I'm subject to those texts. If you don't believe the Bible is authoritative over you... despite your political, cultural, theological, emotional, philosophical tendencies then admit it; don't assume your current persuasions must be the only interpretation of a book you've never read, a book thousands of Christians throughout history have dedicated their life to understanding, a book that has already started cultural revolutions (because it disagreed with the culture of those times). If you don't believe the Bible can tell you when your wrong; when your culture is wrong; when your thoughts are wrong; when your feelings are wrong... then you clearly don't hold the Bible in enough esteem for it to even matter what it does say. And if it doesn't matter what it does say, then stop pretending to be an expert in it. And stop wasting your time trying to convince Christians of what it actually says.

You claim that the Bible was used to support slavery, but has it ever occurred to you that the people who used the Bible to support slavery were the very people in your position: never having read the Bible, but trying to convince others that this is what it actually says. How much more dangerous is a Bible in the hands of those who don't care what it says--who only want to advance their social perspective--than it is in the ones who stake not only their current life upon it, but their eternal destiny. You may not care what it says, but I believe that if I've misunderstood this Bible in several key areas then I'm going to remain separated from the source of all goodness.

"The Right Side of History?" Who's 'Right Side'? I assure you the Nazi regime saw themselves as the 'Right Side.' Vietnam was seen as the 'right side' by some. The Hippies and the Sexual Revolution saw themselves as the 'Right Side.' Trump sees himself as the 'Right Side,' and Clinton herself... which one is right? Or maybe there isn't always a 'right side to history.' The fact of the matter is you cannot predict the "The Right Side of History"... because it is History--by definition it must be past, and using it in a present-future tense is an illogical argument founded upon personal emotionalism. And even when it's become history... how then do you evaluate whether or not it was right? Because you still exist? Or because you have some way to evaluate the status of life in this history? And by what to you evaluate it? By your feelings? By 'just knowing' because 'it's obvious'? Well, it's been obvious to everyone who 'just knows' throughout history that you could actually be wrong about the things that matter most, and your personal evaluation does not rule the universe.

So what if you burn us, so what if you kill us? So what if you imprison us and wrong us? I'd rather be on the wrong side of history as long as I'm on the right side of this eternal & all powerful God.

But stop confusing yourself with the infallible rule of a Scripture you don't believe. That's just courteous.

I'm willing to debate with you; I'm willing to argue logic, consequences, cause & effect; societal norms and ethical 'ought to's, but please--oh please--stop using this history phrase; you aren't persuading, you're assuming; you aren't arguing and debating, you're catch phrase dismissing a priori, and that gets us nowhere. If you're truly interested in the truth, not just your ideological agenda, then stop with the name calling, cliche-inducing, meme-creating one shot 'burn' statements and start thinking, talking, and most importantly listening instead. Because otherwise you become like the 'bigots' you so vehemently dismiss. Are we wrong because we have a different standard of judgment? Maybe, but how can you ever know unless you take the time to hear us out?

Looking forward to a humble dialogue on common ground,

EJ Boston
Posted by EJ Boston at 8:00 AM