What do we need?

Why didn’t Jesus incarnate immediately after the fall?

Have you ever considered why God didn’t solve the problem of sin immediately or at least sooner? Was it simply to wait for the Roman world to perfect crucifixion? But didn’t Babylonians and Assyrians have plenty of painful death methods and the attitudes to match? Was it because the Roman roads would provide avenues for the spread of the gospel? But wouldn’t the single Adamic family make for a much easier evangelization process? Was it simply because God wanted more humans? But couldn’t there have been some metaphysical way for regenerate humans to birth regenerate babies? Was it perhaps because he wanted every individual to experience their own fallenness to appreciate newness of life? Whatever blur of possibilities coalesced in the goodness and wisdom of God, I offer one additional reason.

What is it that you and I need?
Is it Money? Acceptance? Marriage? Security?

What would Adam and Eve have said? …

Imagine the scene in Genesis 3. Adam and Eve have eaten; God comes to them on the flurry of wind:

“Adam, where are you?”
“Here am I.”
“Why were you hiding?”
“Because we were naked and ashamed.”
“Who told you that you were naked? Have you eaten of the tree of which I told you, ‘You shall not eat?’” asks God.
“The woman you gave me—she told me to eat.”
“Why did you do this?” he asks Eve.
“The serpent deceived me,” is her response.
“What is it that you need?” asks God.
“Forgiveness!” they say.
“Look,” says God, “I will provide what you need: Here is my Son in human flesh. I require his death for your forgiveness.” After this sacrifice God asks, “Do you understand what I’ve done for you? And do you understand who I am?”
“Yes,” responds Adam, “you have removed our transgression from us through your Son, and you are the God who forgives and the self-sacrificing one.”

Wonderful! How true, and how good!

But what if he had waited until they had been removed from the garden for several years? Then Adam might respond, “You have removed our transgression from us and restored us to your presence through your Son; you are the God who forgives, the self-sacrificing one, and the one whose dwelling is goodness!”

And then God says, “Look, I have given you these things, but what is it that you need?”
And humanity responds, “We need a true prophet, a righteous king, a delivering judge, and a holy priest. We need the presence of God dwelling in our midst and a seal of the promises you have given we need to have the sinful flesh removed from our bodies, and a place of security and inheritance; we need the law fulfilled in all righteousness and an absence of all failure; we need a son, the true Son who comes whence nothing should be expected and the faithful husband who never forsakes his bride! We need a conquering general, a true rest, a full restoration, release from bondage, a return, a place of safety, a people to call our own in diverse-unity, a guiding shepherd, a sin sacrifice and fellowship offering,; we need wisdom and direction, a full table of celebration, a passage through chaos, and a new song!”

And God says, “Behold! I give you what you need! Here is my Son, in whom I have caused all my fullness to dwell! He is your Savior and your Redeemer, the lamb who was slain; the lion of Judah who takes his throne, the true meeting place of God and man, an inheritance forever, who seals you in his covenant and removes all unrighteousness from you; his a priest forever, the fulfillment of the Law, the propitiation of my wrath, the expiation of sin, the substitute for your sin and death; the liberator of captives, the baptism, the bread and wine, the wisdom of eternity, the shepherd, the head tribesman, the new covenant, and the new song! Look unto him and be satisfied! Look upon him and know me!”

Why did God wait so long? Because he had to explain to us what happened when we rebelled against him; he had to show us our need, and teach us what to look for in a Messiah. He had to give us the categories to interpret the person and work of Jesus, that we might know God. Because he is what we need, but we would never have realized who he is unless he was patient; we never would have understood our need unless he told us. 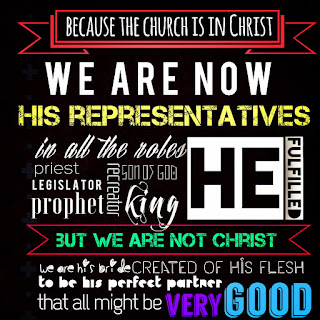