Frost on Friendship [and Gospel Partnership]

I came across a poem on friendship, partnership, and beauty in its own right. In the poem Frost recounts an aspect of farming life, and finds in it a deeper camaraderie—one that arises from seeing the means as an end in themselves. And only when the moment is seen with clarity are his eyes opened to the whole, and he who thought himself alone discovers that unity is found in diversity and partnership found in tasks separated by millennia.

And so, as I consider my friends and family in faith who are harvesting the fields, and even when I feel at times alone in prayer—or they alone in field—I am comforted, knowing that I pursue my task, and recognize the beauty  found in the task itself; not the end only. And soon we will sit beneath the tree of life and reminisce on life which Grace has carried us through.
What is Paul? What is Apollos? Are they not servants? One plants, the other waters, but God gives the growth.
The harvest is plentiful, but the laborers few... Therefore, pray.
I have some sheep that are not of this fold.
I must go to another city to preach, for this is why I came.
How beautiful are the feet of those who bring the good news.
I thank God for you always when I pray.
I plan to visit you on my way to Spain.
Behold I have retained a remnant who have not bowed down their hearts to Baal.
And you will be my witnesses in Jerusalem and Samaria, and all of Judea even to the ends of the earth.
(As with all poetry I recommend reading it once through at a normal pace, and rereading it leisurely that the Spirit might encourage your hearts, lo even with the words of mere men.)
-------------------------------------------------------------------------

THE TUFT OF FLOWERS

I went to turn the grass once after one
Who mowed it in the dew before the sun.

The dew was gone that made his blade so keen
Before I came to view the levelled scene.

I looked for him behind an isle of trees;
I listened for his whetstone on the breeze.

But he had gone his way, the grass all mown,
And I must be, as he had been,--alone,

“As all must be,” I said within my heart,
“Whether they work together or apart.”

But as I said it, swift there passed me by
On noiseless wing a bewildered butterfly,

And once I marked his flight go round and round,
As where some flower lay withering on the ground.

And then he flew as fast eye could see,
And then on tremulous wing came back to me.

I thought of questions that have no reply,
And would have turned to toss the grass to dry;

But he turned first, and led my eye to look
At a tall tuft of flowers beside a brook,

I left my place to know them by their name,
Finding them butterfly weed when I came.

The mower in the dew had loved them thus,
Leaving them to flourish, not for us,

Nor yet to draw one thought of ours to him,
But from sheer morning gladness at the brim.

The butterfly and I had lit upon,
Nevertheless, a message from the dawn,

That made me hear the wakening bird around,
And hear his long scythe whispering to the ground,

And feel a spirit kindred to my own;
So that henceforth I worked no more alone;

But glad with him, I worked as with his aid,
And weary, sought at noon with him the shade;

And dreaming as it were, held brotherly speech
With one whose thought I had not hoped to reach.

Robert Frost, "The Tuft of Flowers" in Robert Frost's Poems (with an introduction and commentary by Louis Untermeyer), New York: Henry & Holt Company, 1971.

In connection with unity in diversity, be sure to check out Crossway’s forthcoming book Blind Spots by Collin Hansen. 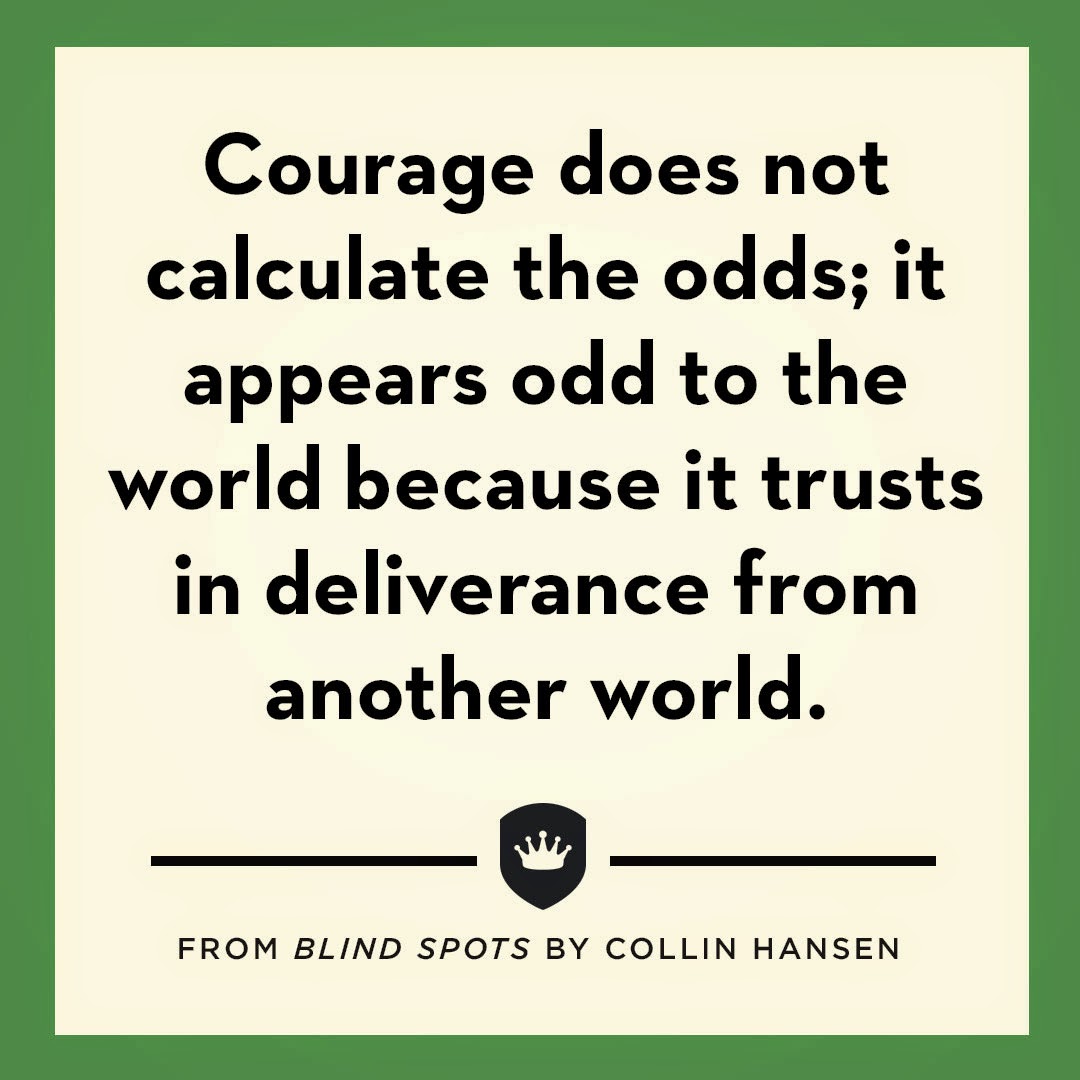 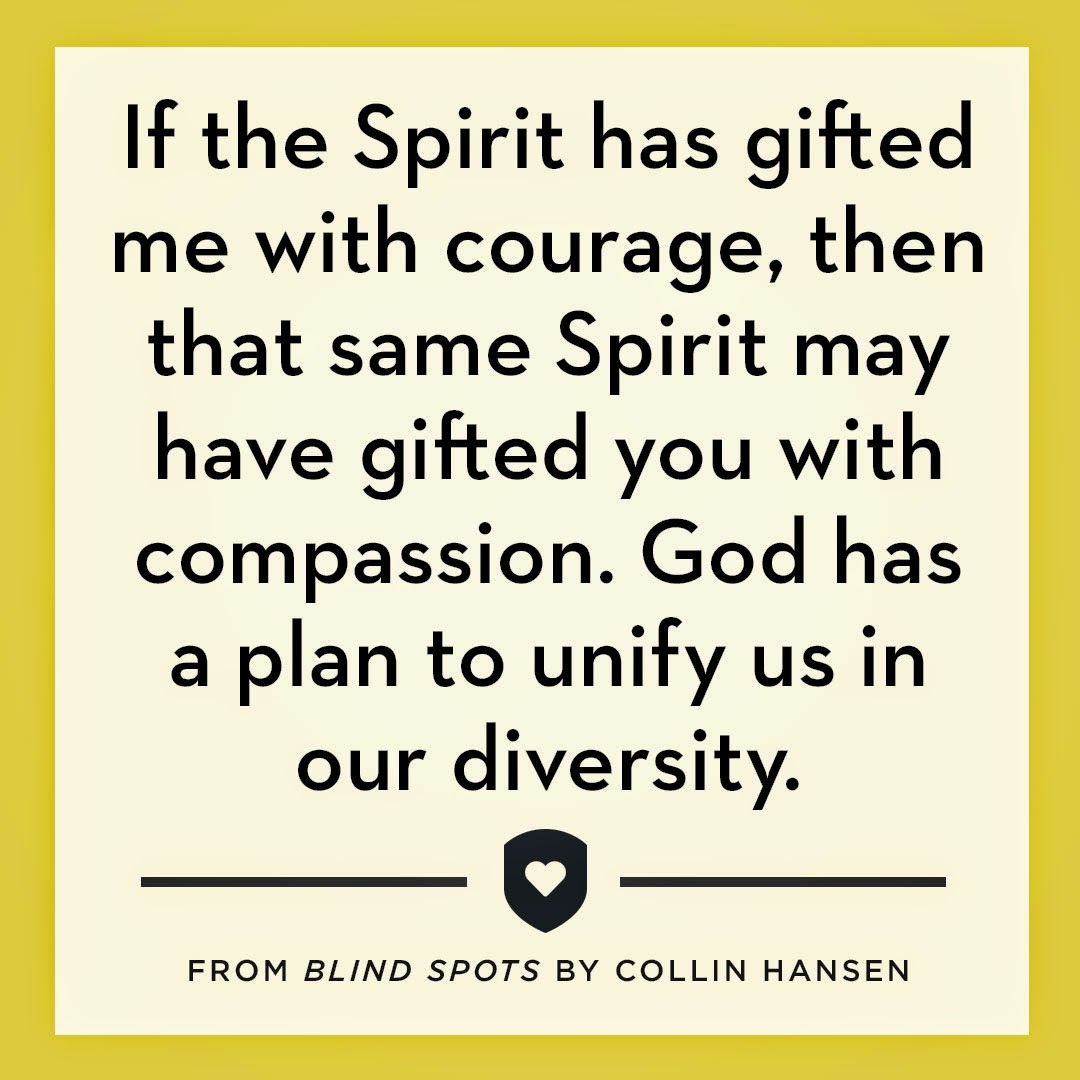