A Provocative Description of Love and hate

I recognize that the ensuing discussion will be provocative, but not for provocation’s sake. Rather because the subject matter, and my statements are sure to provoke much emotional and intellectual action. So why discuss something? Why mention something that will cause you to question my sanity and belief in a good God? First because the explicit issue came up in conversation with a dear friend recently, second because there are numerous issues related to this one, and third because I believe that wrestling with these thoughts will shine forth the glory of God and stretch your capacity to stand in wonder of our Triune God.

Something you agree with

D.A. Carson has written an extraordinarily helpful book entitled The Difficult Doctrine of the Love of God. It can be downloaded for free from The Gospel Coalition (book #40). In his book Carson outlines five of the ways “the Bible Speaks of the Love of God”; he declares it is not an exhaustive list (p.16) but proceeds to explain (1) “The peculiar love of the Father for the Son, and of the Son for the Father,” (2) “God’s providential love over all that he has made,” (3) “God’s salvific stance toward his fallen world,” (4) “God’s particular, effective, selecting love toward his elect,” and that (5) “God’s love is sometimes said to be directed toward his own people in a provisional or conditional way—conditioned, that is, on obedience” (p.16-19). And I should hope that, even if you do not agree with those statements yet, you will agree with his biblical defense of them. Carson wants us to recognize the nuance Scripture applies to the word “Love.” It’s not a flat synonym for “kindness” or “tolerance” or “pleasure”; it is a sophisticated term with varied applications.

One of the applications of love takes an unappreciated form in our cultural context. That form is wrath and judgment. If you are an evangelical Christian, you must believe in the wrath of God. Without the wrath of God, your entire system of Christianity falls apart—it is voiced poignantly and succinctly in Niebuhr’s famous quote: "A God without wrath brought men without sin into a kingdom without judgment through the ministrations of a Christ without a cross.” Niebuhr was critiquing the social gospel, but the logic follows through the wrath of God: if there is no wrath of God, there is no need for salvation… if there is no need for salvation then there is no need for the passion of Christ. What then was the death and resurrection of Jesus? But atonement theories are not the subject of our discussion. The Christian faith believes in a God who is wrathful toward sin and sinners… because of his love.

This thought appears in the last chapter of Carson’s book, but it also appears in the thought, preaching, teaching, and writings of countless leaders of the church. God is wrathful toward sin because he pursues the perpetual glory of the distinctive persons of the Trinity while sin seeks to diminish that glory; what’s more, sin diminishes the joy and goodness of his creation. Therefore, God hates sin because it takes what is good and contorts it into something ‘ungood.’  This is commonly termed the justice and/or holiness of God.

Theologians relate the holiness, justice, righteousness, and love of God with the term “unity.” They do so in differing ways, each with its own merits. Philosophers, on the other hand, prefer the term “simplicity.” By which they mean that anything which God is, is of God fully and completely. In other words, not only does the love of God “not contradict” his justice, but his love is his justice. All well and good, but aren’t we just splitting hairs at this point? Yes and no. Is it precise? Yes. Does it even matter? Also yes… for several reasons, most immediately because of

Something I hope you’ll one day agree with

even if it takes a couple nights’ hauntings to do so. Not only is God’s wrath an expression of his love toward his Triune self, nor even also toward his children who are affected by it, nor even also toward the earth ‘subjected to futility.’ The wrath of God is an expression of his love… toward the one upon whom his wrath his set. Put simply: God hates the sinner because he loves the sinner.

If my father left my family, I would feel a semblance of hatred toward him because he has denied his identity as father and become something else. He has become what he ought not be. I have hatred because I want him in the right way. By contrast, if I did not care whether or not my father was a father to me—if I was indifferent toward him—could you really say that I love him?

If my girlfriend cheated on me, I would feel a semblance of hatred toward her because I love. If I was indifferent toward her chastity then you could not say I have loved her.

If your hero ignored and neglected you in that great opportunity, who has loved? You despite your anger have loved; your hero because of his indifference cannot be said to have loved you.

So this: any recognition is a greater act of love than no recognition.

Indifference does not even recognize the existence of an object, let alone have any passions toward it. Hatred, though, recognizes the object, and that recognition is at the very least greater than indifference. Hatred then is upon the continuum of love… or perhaps better: hatred is a webbed expression of love. 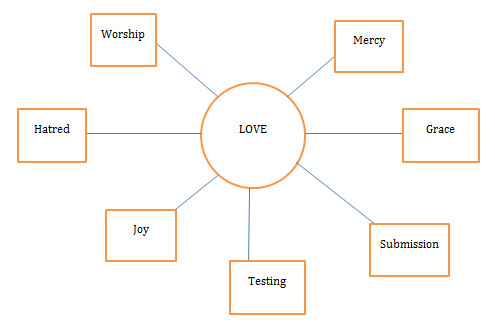 Is it at least possible?

The simple statement of a friend

God is not indifferent toward anything which is because being indifferent would mean that he does not acknowledge that object. However, God—the Creator and Sustainer of all—must give mind to all things which are in existence, else they would not exist. “The only things which God is indifferent toward,” Kyle said, “are those things which aren’t created.” And he is precisely right: if God created something, he created it with intent, and if there is intent for that object then God is not indifferent toward it—rather that object has been purposed; God loves that object, and when it is good (as it was created) then he loves it with joy; when it has become less (that is evil) then he loves it by conviction, judgment, wrath, etc. according to his wisdom. “Then what is hell?” Hell is described analogously in Scripture as fire, absence of the presence of God, presence of the wrath of God, endless torment, et cetera. But one thing hell is not is indifference or ambivalence. In the Lake of Fire, all sin and sinners will be retributed justly. And this is an act of love toward the redeemed and toward the damned.

But perhaps I’ve missed something. Perhaps you see a hole somewhere. Perhaps hate also needs to be distinguished into ‘types’ before enter this discussion. What say you?